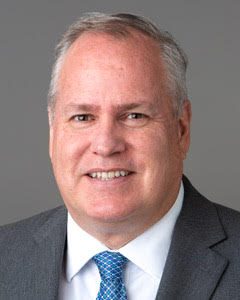 Patrick joined the fundraising profession in 1996 and worked for a broad variety of causes, most recently at Goodwill San Francisco. He began volunteering with DER in 2011, eventually serving as President of the Board from 2015 to 2016.  During his leadership, DER rebranded and began work on the current website.  He also volunteered with the Foundation Center (now Candid) from 2009-2012, with the Association of Fundraising Professional’s Fundraising Day in 2010, and rode in the AIDS Lifecycle.  Patrick will be missed and fondly remembered for his kindness and sense of humor by the many colleagues and friends who knew him.  Patrick’s obituary is here.

Patrick Heryford has worked in development for 22 years.  He took his first position as the Stewardship Director at a church, with little knowledge or experience in development.  To learn about the field, he enrolled in the University of San Francisco’s one-year Director of Development certificate program.  “I enjoyed and did well in the classes, which validated that this was the field for me,” he says.

In his current position at Goodwill of San Francisco, San Mateo, and Marin, Patrick manages corporate partnerships and grant seeking, as well as builds relationships with local companies and employees that benefit Goodwill’s job readiness and career services mission.

During the two decades he’s been in the field, Patrick has seen a greater shift from transactional to relational fundraising.  “This change reflects my own thinking,” he explains, “When I started, I could send out the same proposal to a large pool of funders and sit passively at my desk waiting for responses. Today, I prefer to talk with giving officers, building relationships with them, so that my applications are focused and have the greatest chance for funding. In the past, the writing came first; today it’s nearly the last step I take when applying to a funder.”

Patrick approaches his work, and life in general, from a perspective of gratitude.  “I don’t stress about my work, meeting goals, or get nervous when asking for gifts. Rather, when starting from a place of gratitude, I believe donors recognize their value to me is beyond the amount on a check. That, coupled with the good, transformative work by the organization, is a recipe for successful fundraising.”

“I have a bell on my desk and joyfully ring it when a gift is received to celebrate our donors’ generosity.” He enjoys sharing donors’ stories with his co-workers, focusing less on the amounts and more on the reason why the gifts were made.

Patrick has been a very active member of DER for at least 15 years. He’s served on the Board, including one term as President, and co-led the former affinity group Grantseekers Anxiety Support Group (GASP).  “I attend as many luncheons as I can,” he says, “Even if the topic is not directly relevant to my work, I enjoy the networking and camaraderie, reconnecting with longtime friends and making new professional connections.”

He continues, “I always learn a lot of practical tips by attending DER sessions. I tell prospective members, I often attend a DER luncheon, and then immediately put into practice some of the techniques I learned.”

Outside of work, Patrick enjoys being in nature, especially hiking in the redwood groves.  He also enjoys bicycling and has ridden 550 miles from San Francisco to Los Angeles three times with AIDS/LifeCycle.

Patrick loves all things cultural and is a long-time member of the Fine Arts Museums of San Francisco and SFMOMA, as well as being a season ticket holder to the San Francisco Ballet and Broadway San Francisco.  “Lately I’ve also taken weekend trips to explore where I want to retire in about ten years. I’m looking for a place that is more affordable and less hectic than the Bay Area. I’m currently leaning toward Tucson, Arizona, but if anyone has suggestions, I’d love to hear them!“